About three years ago I purchased a tool that until recently I have never had a real need to use….a welder. I purchased it at Harbor Freight and it only operates on 120 volts so really its not good for anything other than playing around and basic light gauge stuff. It might repair a small leak in a exhaust pipe or something non critical like a patio table. Its a MIG unit that uses shielded wire to provide the “bubble” and does not even have an input for shielding gas. The intent for the purchase was to sort of self teach the skill in preparation for starting the resto work on my grandpa’s truck. Obviously….I am still preparing. Funny how projects get put off when you have kids, a house and a job! It was less than $100.00 and today it paid for itself or pretty close to it. 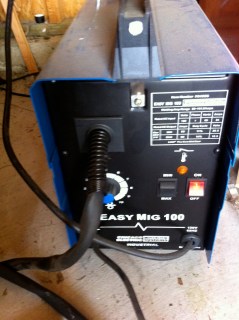 Today the the bagger on my mower broke. You know…the bag you hang on the back of the mower to catch all the clippings. Its pretty basic….a steel frame wrapped in a mesh bag. One of the welds popped loose and the whole thing just collapsed.  After I said a few nice words….it dawned on me….I can fix this!! 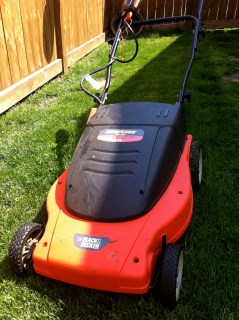 Broke out the grinder (first real use as well) and removed the paint. Cleaned the area for the repair……Put on the spaceman mask and guess what?? Finished cutting the grass! 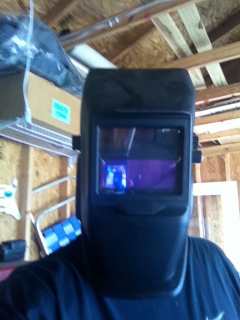 Something about that process….the heat, smoke and sparks flying that feels very cool. I get to work with a lot of guys on job sites that weld for a living. They work on Steam headers, process piping and reactor vessels.  That kind of welding takes years to master. Not only the art but the theory and science of the whole thing. Pretty cool.

Normally this sort of thing is no big deal, I run around fixing shit all the time. A lot of the time even if it’s not even broke…but this was a special one. Why? I purchased the welder the same day I found out Ali was pregnant with Sam. 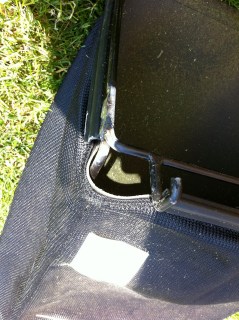 One thought on “What a Tool….”